In Oct 2019 I was on a cruise ship that stopped at Malaga, on the southern coast of Spain. The most famous show cave in the area is Nerja, I went there in 1968 during a holiday in Torremolinos on the Costa del Sol. This time I decided to go to El Tescoro Cave as it was only 11 km east of Malaga and accessible by bus.

From the bus stop it was a steep walk uphill to the cave. Entry was €4.65 for a self guided tour. 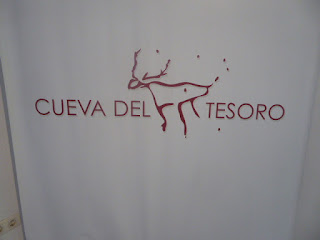 The Tescoro Cave is just one in the Cantal Caves complex.

Cantal Caves are the only sea cavern in Europe that can be visited by tourists and one of three existing in the world. The system connects to the sea through Cantal Cliffs. It is white limestones, brecciated and oolitic materials from Middle and Upper Jurassic period (180 - 135 million years BC). They are on the carbonated part of the Malaga stratigraphy and is mainly sub-horizontal. Sea water formed the caves. During marine regressions, speleothems formed, then during transgression the sea water polished the walls and speleothems. The massif was submerged underwater from 1.8 million to 360,000 years, during the Lower and Middle Pleistocene. The caves haven't been submerged since 240,000 years ago. So the main formation is marine, followed by karstic.

Cantal Caves is a group linked to the Cliffs, (connection between the sea and cave) comprised of Tesoro Cave, Victoria Cave, Goures Cave, Hope Cave and caverns RV-7 and RV-42.

Many of the caves have archaeological remains and are known for their cave paintings.The Tescoro Cave has 63 Palaeolithic panels, but none of these are in the show cave area. The show cave opened in 1991 and in 2005 became part of the Mediterranean Archaeological Park. The show cave is called Treasure Cave, also Higueron Cave, Swiss Cave or Cantal Cave.Treasure Cave has 6 chambers open to the public. The one which is closed, Breuil Hall, has most paintings. Victoria Cave has 5 chambers but is also not open to the public. The caves are protected. 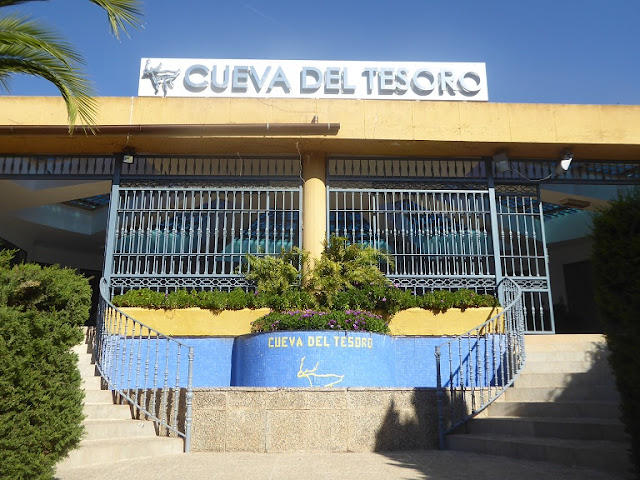 Rock art in the Iberian peninsula dates to c. 32,000 BC. With anatomically modern human groups, the first graphic references are of animals, hands and complex signs. The main cave groups are in the French-Cantabrian zone, as well as in the province of Malaga. The art is found in the deepest zones of the caves with difficult access and far away from the habitable area. The painted animals are not usually those eaten by the humans that paint them.

The red, ochre and black colours came from iron and manganese oxides and some other elements such as mud and carbon from wood, bone or burnt teeth. The paint was applied either dry or as a paste or liquid based on some binders and by using pencils for definition. A yellow liquid clay applied with the fingers is not common.

At Cantal Caves there is a predominance of painted motifs over carvings (93 of 104), where red paintings are more plentiful, 74%, over black and brown pigments.

The methods to apply the paint were fingers for red and hands and possibly a quill. Charcoal was used in black paintings. Only one painting is in brown.

Most motifs are zoomorphic ones, signs and hands. e.g. a horse, goat, bird, bovid, a fish shape figure and a deer, gathered in pairs. There are spots and undefined figures. There are lots of signs of erosion. Anthropomorphic figure have no head, their central line being the body and the curved lines being arms and legs.

Cueva del Tescoro -
In the entrance hall there is a small display of information boards, about the history and geology etc. A series of steps lead down into the cave, with information displays on each landing. 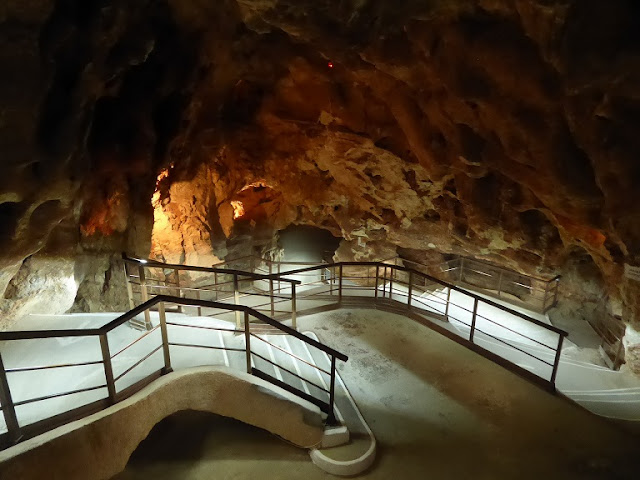 There isn't a great deal to see in the caves. Not much stal. The audio tour gives info at various points. Firstly you go through the passages on the left, then return to the chamber in the photo above, and then go to the passage on the right side of the photo. At the end are 2 small lakes - 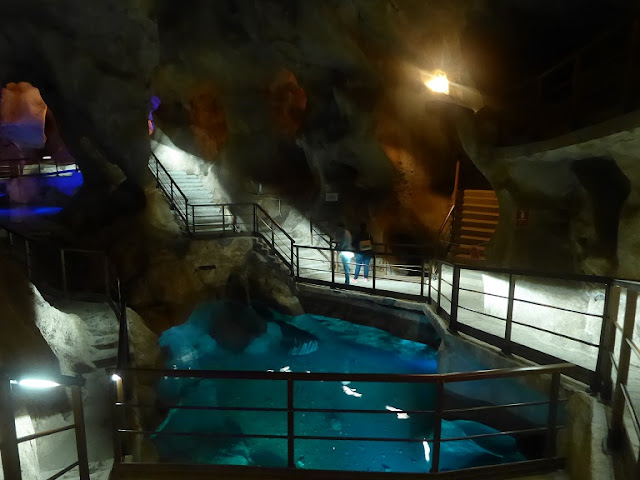 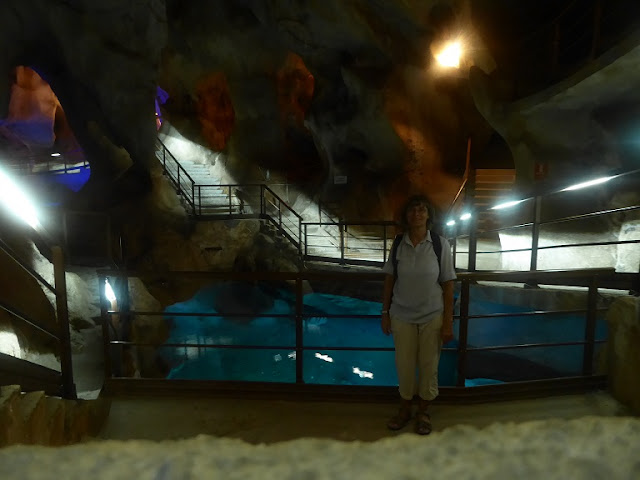 To go out I took the lift, as it is glass sided and gives some views as it passes up through the cave.

See more on El Tesoro Cave. And for more photos of the cave, see this page.
Posted by cavingliz at 7:06 PM