At the end of November 2020 the international media was full of stories of some amazing rock art found in Colombia. The art had actually been found in 2019 but had been kept a secret until the release of UK's Channel 4 documentary, "Lost Kingdoms of the Amazon". It's a 3 part documentary presented by Ella Al-Shamahi and first shown on English TV on 5 December 2020.

The second episode on 12 December features the rock art. Ella goes to Colombia and her local guide got permission from the Farc (a guerrilla movement) for her to enter the area.  She is shown the rock art by British archaeologist Mark Robinson. He spent 2 seasons working there

The art is on walls of stunning cliffs that rise above the plains. The area has been off limits for decades due to the war between the Farc and the government.  Following the peace treaty Mark was one of the first archaeologists allowed back in to explore it. He and his team discovered 17 walls of ancient drawings, all completely unknown to science.

The first cliff wall shown is absolutely covered in red ochre drawings that are still amazingly bright.  There is a mix of geometfic patterns drawn interspersed with animals and even humans.  There are also handprints.

The first people are thought to have reached the Americas 15,000 - 25,000 years ago, passing a land bridge that then joined Siberia to Alaska,  then over thousands of years travelled down the the narrow gap of Central America and into the Amazon.

The paintings can't be carbon dated as there is no carbon in the ochre. Photo from the Guardian : 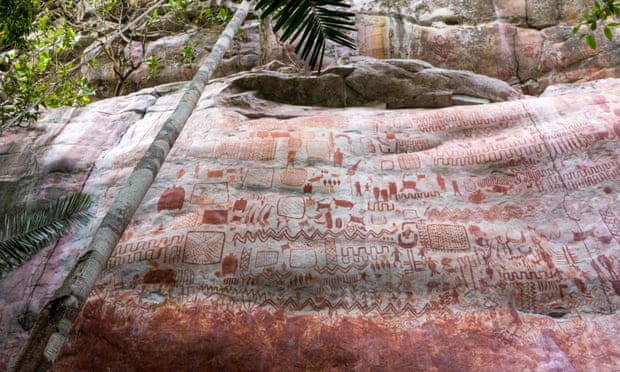 We are shown another wall. The walls are being 3d scanned so archaeologists can examine the art without having to go there. Mark estimates there could be more than 100,000 paintings on the rocks. Probably the greatest cache of ancient rock art in the Americas and it is undescribed to science.  This second wall the designs look simplier and possibly older. One animal drawn is a mastodon, a prehistoric relative of today's elephants.  Mastodons haven't been around for 12,000 years but the artists must have lived alongside them. Other extinct species show a giant sloth and an early horse that went extinct in the Americas around 13,000 years ago.  So the people lived in a mix of forest and open Savannah.

And SD Celar British Museum has a good article and photos on the rock art and colonisation and settlements of the Colombian Amazon.

Posted by cavingliz at 7:30 PM