Having visited Drogarati Cave on Kefalonia, the next attraction was Melissani Lake.

Kefalonia is the largest of the Ionian Islands in western Greece. It's important natural features include the Drogarati caves and Melissani Lake. Melissani cave lake is located near Karavomilos on the east coast. It is a cave containing a lake. The roof of the chamber with the lake collapsed and when the sun is shining there is a beatiful scene of the clear lake water. Tourists are taken across the lake by boat and into the chamber beyond.

Luckily when we arrived there was no queue at all. Entry is €6. Visitors walk down a sloping tunnel to reach the lake where the boats are waiting. With Covid-19 social distancing rules, the boats weren't as full as normal. A man rows the boat across the lake. 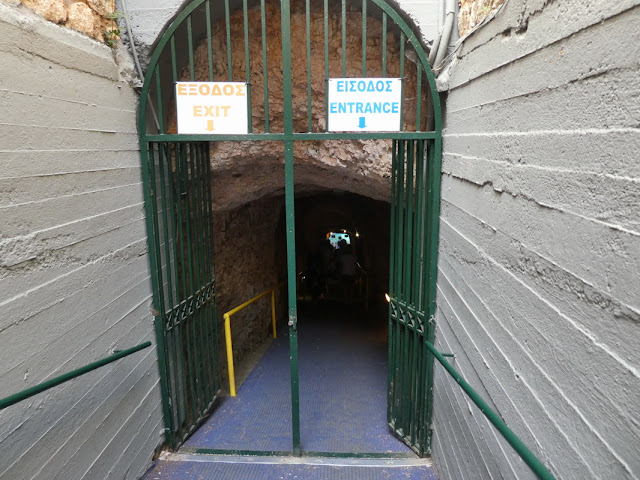 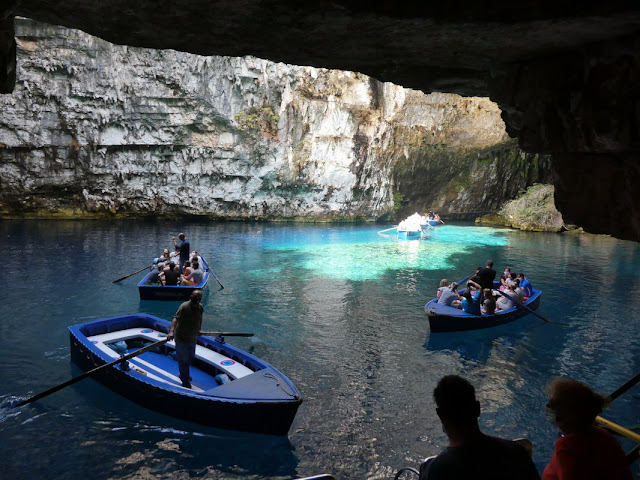 The lake is 39 m deep. The water is so clear. Apparently eels live in the lake but I didn't see any. 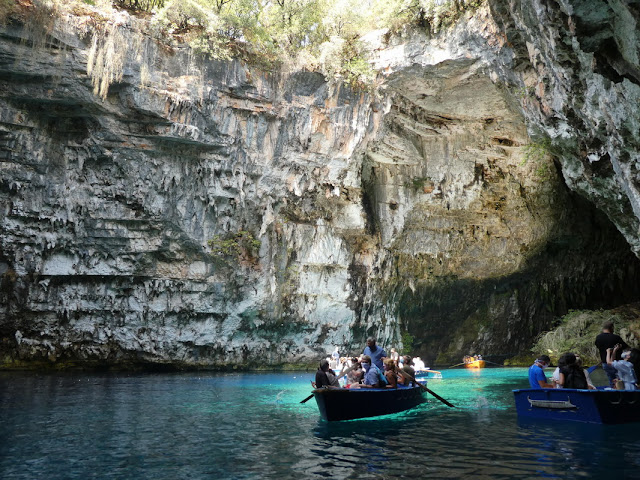 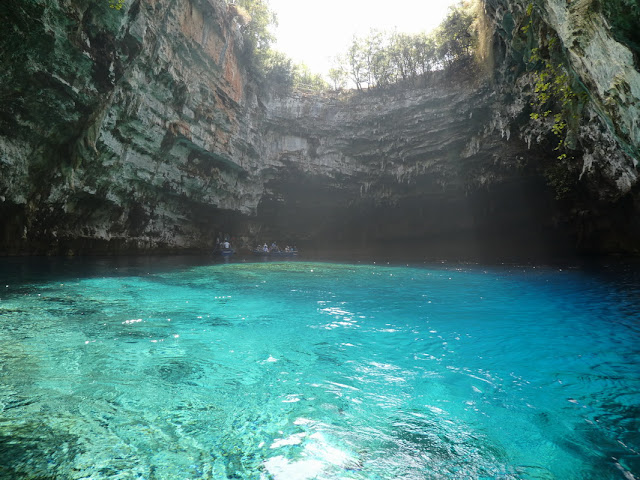 At one end of the cavern is the Cave of Nymphs, so called because some ancient pottery was found there decorated with images of the god Pan and several nymphs. The lake was named after one of the nymphs, Melissanthi. The entrance to the dark chamber really reminded me of a mini version of the entrance to Deer Cave in Mulu, Malaysia. 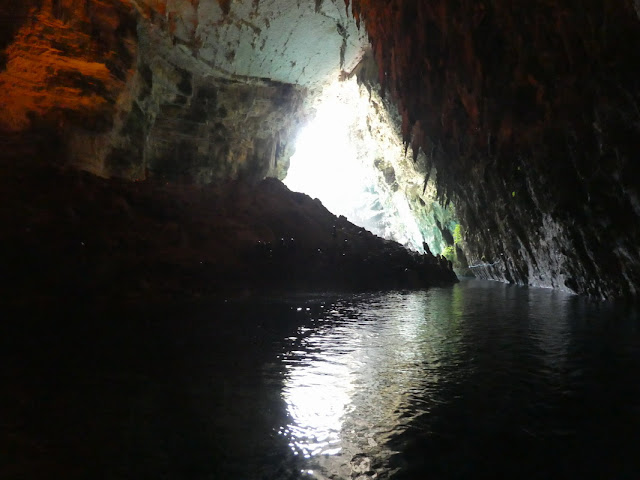 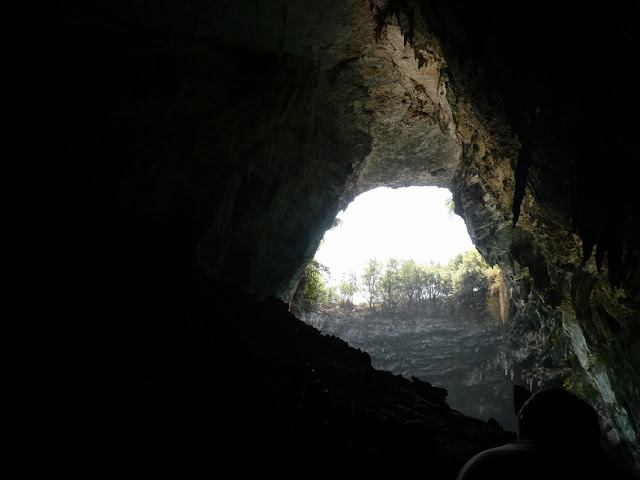 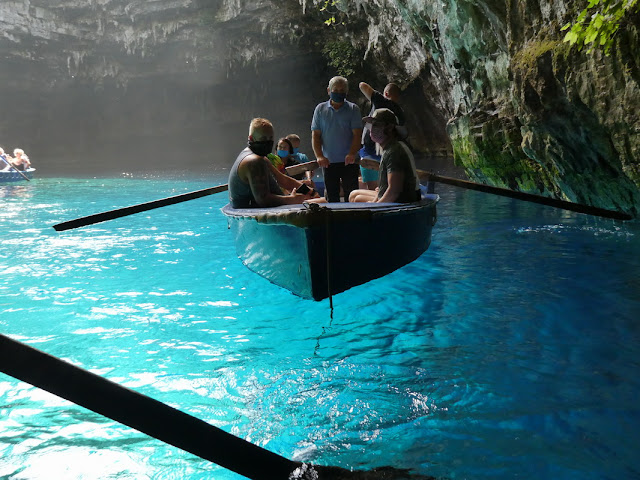 Geologist have studied the underground drainage of the island and have found that the Melissani lake water comes from the other side of the island, from the sinkholes at Katavothres. Katavothres is located on the tip of the headland north of Argostoli. There is a lighthouse there. 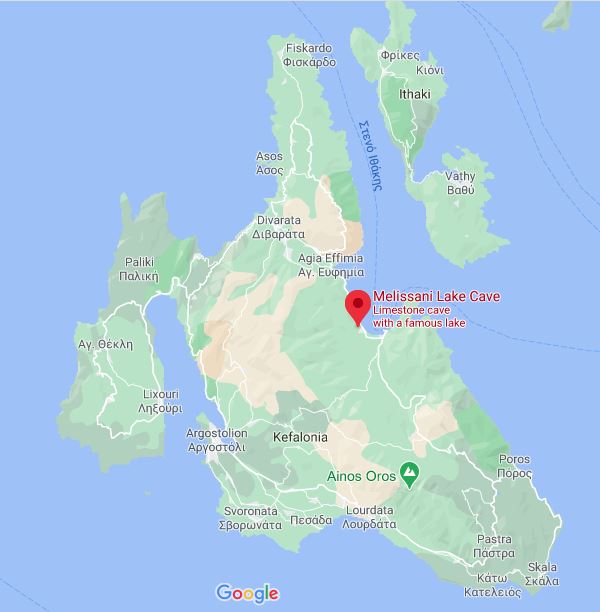 Just 3 km outside of Argostoli is the Katavothres Lagoon, a fascinating geological phenomenon. The name literally means ‘the swallowing hole’ and the lagoon features deep sink holes. The holes were investigated in the 1960s and a purple dye was poured into the holes to see where the water went – and revealed that the water passed through a number of underground rivers before re-emerging in Lake Melissani more than 15 km away. Two weeks later the same water pours into the sea at the village of Karavomilos. A watermill was erected here to demonstrate the resurging water.
See Wikipedia entry for Melissani Cave.
Posted by cavingliz at 7:37 PM