As part of my "Underground London" blogs, on 21 Feb 2019 I went to Kensington Library lecture room for a talk by Anthony Clayton on "Subterranean City : beneath the streets of London". It was the first time I have been to one of his talks. He has written several books on underground England. 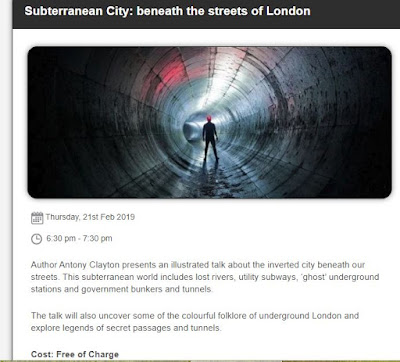 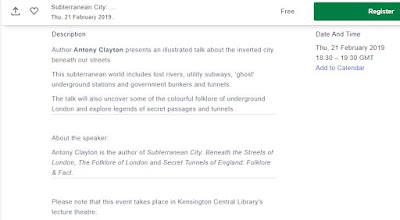 The talk was good as it has given me ideas of places to visit. These include the Temple of Mithras at the Bloomberg Building in London. There is also the mail rail, run by the Postal Museum, on part of the line that was used for transporting mail in the past. He also talked about a lot of the old parts of the underground lines and stations that are now closed. Down Street station can be visited on tours.

There was some mention of the lost rivers of London. And the old air raid underground shelters, such as the one at Clapham South. The London Transport Musuem has hidden London tours.

Clayton mentioned the Urban Explorer who has published lots of photos on the internet.

The lecture hall still has the original seats with ashtrays on the backs of the seats. That is something you rarely see nowadays. 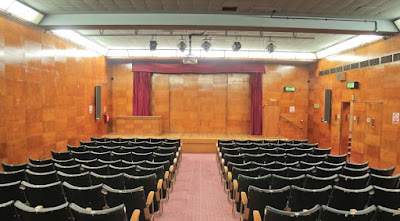 I now have more ideas of places to visit, and will link to this post as and when I visit them.

My visit to the Temple of Mithras , London Mithraeum .

Posted by cavingliz at 6:16 PM