During Anthony Clayton's talk this week on subterranean London, he talked about the Temple of Mithras at the Bloomberg Building in London, I decided to go and visit the next day. I booked a free ticket online, expecting it to be full, and when I arrived found I didn't really need to book.

The Roman Temple of Mithras is in the London Mithraeum Bloomberg SPACE. A Mithraeum is a Mithraic temple, used by the worshippers of Mithras.

The impressive Bloomberg building is the new European HQ in the heart of the city. It is located between Bank and Cannon St tube stations. 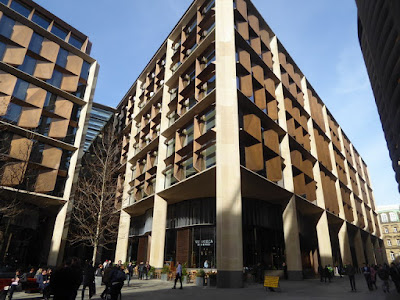 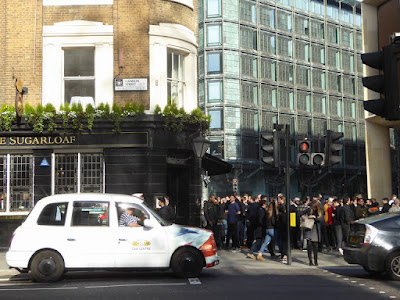 The Bloomberg SPACE is a new cultural hub and houses the ancient temple, a selection of the remarkable Roman artefacts found during the recent excavation, and a series of contemporary art commissions responding to one of the UK’s most significant archaeological sites.

The history of the site from Bloomberg :
"The site lies over the course of one of London’s lost rivers, the Walbrook. Nearly 2,000 years ago when Londinium was founded by the Romans, this river marked the limits of their first settlement. In the 3rd century AD, nearly 200 years after the founding of London, a Roman Londoner, built a temple to the god Mithras on this reclaimed ground, next to the river.

This water feature is by a Spaniard Cristina Iglesias, called Forgotten Streams, it represents the ancient Walbrook River that used to flow through this site and used as a watercourse by the Romans. 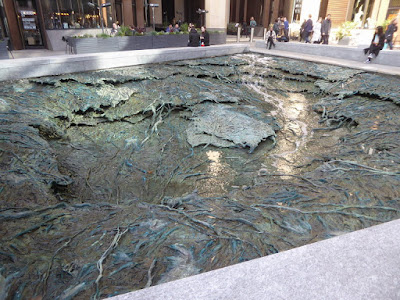 Mithras
The mysterious cult of Mithras first appeared in Rome in the 1st century AD. It spread across the Empire over the next 300 years, predominantly attracting merchants, soldiers and imperial administrators. Meeting in temples which were often constructed below ground, these were private, dark and windowless spaces. The mythological scene of Mithras killing a bull within a cave, the ‘tauroctony’ is at the heart of the cult, and its full meaning is subject of much speculation."

The original temple was underground. It was a temple to Mithraism, a mystery religion practised in the Roman Empire and very popular with Roman soldiers and merchants. It was based on the god Mithras. Not much is really known about this cult as there are no written records. Just the archaeological findings.

The followers built the subterranean temple in the 3rd century, around 240 AD, to recreate the cave where Mithras killed the sacred bull. The cult members could be likened to the current day Freemasons. The temple measures about 18 m x 8 m.

The temple was disused by the end of the 4th century and slowly sank beneath rising street levels of medieval London.

The temple was found in 1954 during an archaeological excavation in the rubble of bomb damaged buildings of post-war London. First the marble head of a statue of Mithras was uncovered, then archaeologists confirmed the structure uncovered nearby was a temple to Mithras. It became one of the most significant events in British archaeological history. Tens of thousands of visitors flocked to the site to marvel at the Roman remains.

Other artefacts found buried in the temple were white marble likenesses of Minerva, Mercury and Serapis. Also a marble relief of Mithras killing the astral bull, the Tauroctony. The statues were sent to the Museum of London. The temple remains were removed from the site until the 1960s when they were reassembled on an elevated concrete platform in the open air. Not the right place for a subterranean place of worship!

Visitors enter the Bloomberg SPACE on the ground floor, where the art is exhibited, plus an interesting display of Roman artefacts that were uncovered during the excavations. 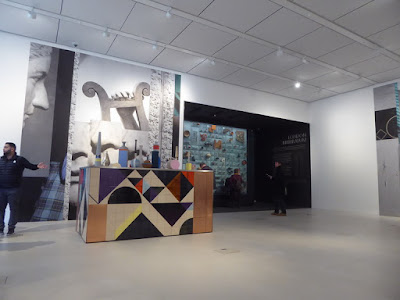 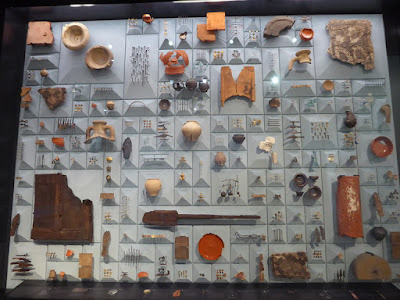 You go downstairs to a room with digital displays and a few information boards. This is where you wait for the 'tour' into the temple, which takes place every 20 minutes. The head of Mithras, wearing a conical cap - 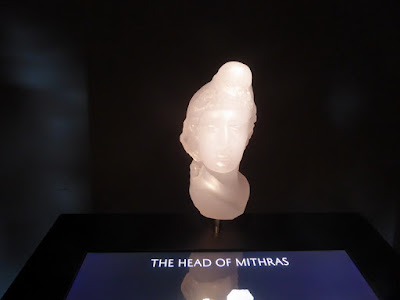 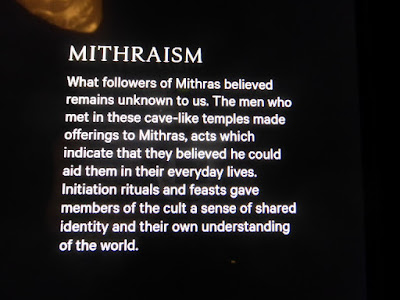 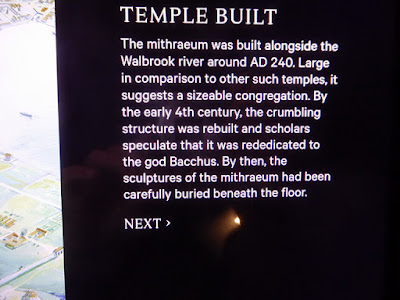 An artist's impression inside the mithraeum - 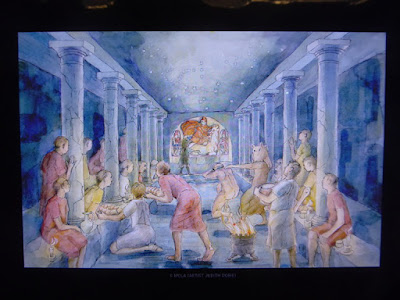 Finally you enter the 'temple'. It is dark. You can see the stone walls and a clever light effect shows the 2 rows of 7 columns around the Mithraeum. You hear chanting of the ancient Romans, followed by talking and laughter of the men in the temple. The show lasts about 6 minutes and then the lights goes on, revealing the Mithraeum. It is all very atmospheric and effective. 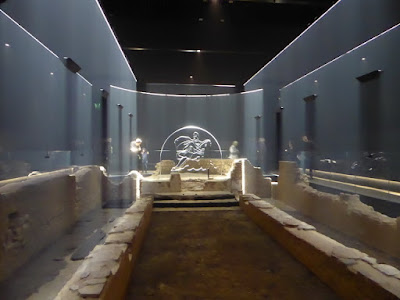 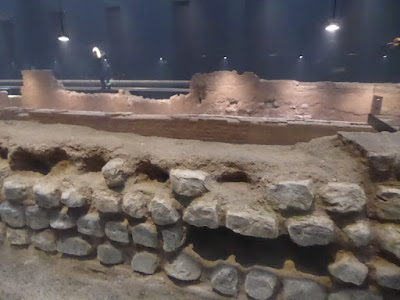 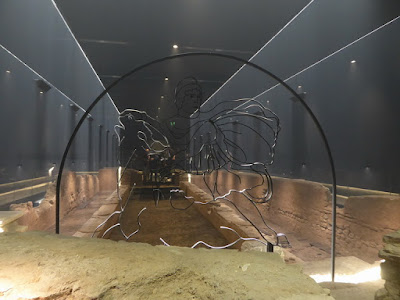 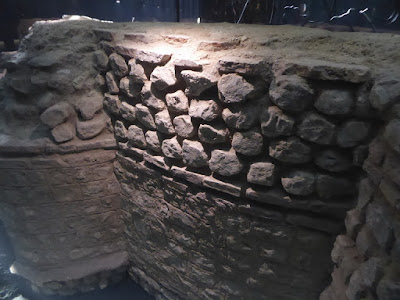 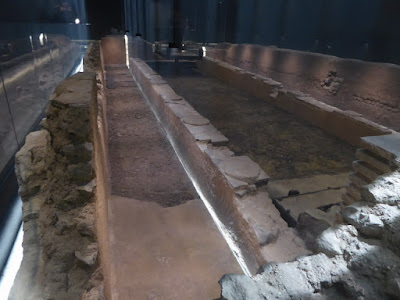 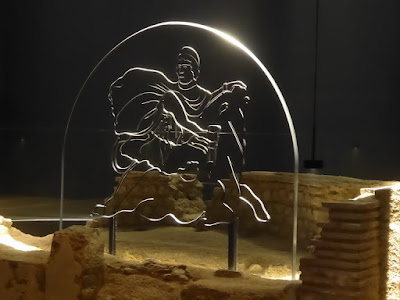 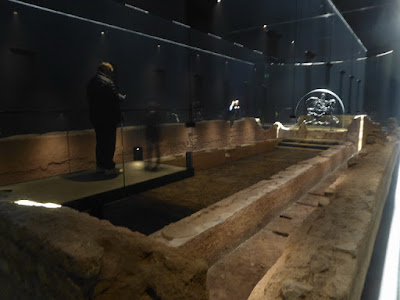 Definitely worth a visit. Entry is free and you are given a 32 page book on the London Mithraeum, thanks to Bloomberg.

See more of the Mithras remains at the Museum of London Temple of Mithras gallery.
Posted by cavingliz at 6:14 PM