There is a lot of limestone in Albania, particularly in the north, where there are a lot of mountains. I went on a tour of southern Albania and sadly didn't get to see any caves.

I stayed in Himare and noticed Shpella e Spilesë, the Spile Cave, by the side of the road. It is at the base of a small cliff by Spile beach.

Wikipedia says Spile's Cave is a monument of cultural heritage in Himara, Vlora district, in the Vlora region of Albania. It is listed as a "Cultural Monument of Albania" and is under protection, category VL091.

According to mythology in Homer's Odyssey,, Odysseus faced the Cyclops in the cave, on returning from the Trojan War.

On the Himara gov page,  using Google translate, it says :
"The cave extends to a depth of more than 30 m with an irregular entry 8 m wide and 7 m high, 3.6 m above sea level. The cave is formed as a result of karst processes. The limestone cliffs that formed the cave walls are tectonically deformed, and there is a large crack on the ceiling. Inside there are some well-developed stalactites. Cave research revealed stratified evidence of prehistoric activity dating from the middle of the Holocene, but cumulative deposits inside the cave may have been ransacked by rising sea levels at the height of the hot period. Archaeologists express their regret because the evidence of exploitation in the Upper Gulf Coast's Upper Lowlands in the Spile Cave may have been lost. A largely unbroken sedimentological and sedimentological examination in the interior documented prehistoric human activity from the Mesolithic Period, 8,000 p.e.s. The areas around the caves were also inhabited during this period, which is evidenced by the ceramics found and tombs. The use of the cave was continuous in all prehistoric and historical periods with more intense human activity from the Early Bronze Age. Shilla was inhabited even in the Iron Age during the Historical, Hellenistic, Roman, even until the Middle Ages. Findings from all of these periods are unique. The ones that differ are microlites and many tools of flint, chisels, blades, digging tools, etc. The Bronze Age hermit in Himara show an advantage of local fabrics as well as the impacts and the similarity with Dodonas pottery. A large number of high-quality Hellenistic pottery dates back to the 5th century BC, including amphora, skyfosa, lemys, and other corundum coral wings (Black paint). The smooth scene, described by Cardini, was no longer visible. The beach that contained only a small hotel and some houses had become a pre-city and the cave that held so much potential for Cardini was no longer visible from the water's edge. Examining the cliff face within the southern spur of the developed beach, we were able to find three of the five caves illustrated on Cardini's map, caves 1, 2 and 3 (Cave 1, the largest cave where Cardini has performed successful digging , was still intact but hidden behind the concrete foundations of a partially built hotel Himara's caves now require a thorough re-evaluation before valuable archeology Himara's cave with the name: The Spilja Cave was declared a cultural monument with decision of the Rectorate of the State University of Tirana "No.6, dated 15.1.1963-" On the Promulgation of Cultural Monuments 2. Spile Cave, in the village of Himara." 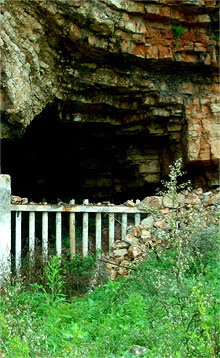 It seems there have been plans to build a hotel in front of the cave. However the site hasn't been looked after and when I saw it, it looks more like a rubbish dump. Even the plaque that declared it a "Cultural Monument, Natural Prehistoric" site has gone.

According to this page : " It is a considerable space, a cave that in this visible part reaches a height of up to 2-3 meters.

Within this cave there is also stalactite and stalactite, formed in centuries as a natural phenomenon typical for prehistoric caves. Water droplets, coming from above, meet this environment somewhat, to immediately create the sensation of the events that have developed within it. Once it gets full and oval, the cave comes narrowing and at the end of its visible and illuminated part creates a "pocket", a kind of barrier that prevents you from moving further. After that comes the rest and main of the cave, which according to Mr. Gaçe, goes up to a depth of 1500 meters.

Formerly in the late 1980s, a group of the Academy of Sciences explored the cave to the end, where lifetime evidence of a period more than 7 centuries before Christ was found.

In 1987, with the initiative of prof. Aleks Budës, the Academy of Sciences of Albania, gave this cave the status "Cultural Monument, Natural Prehistoric".

The above site tells more of the mythology. The cave was first excavated by archaeologists in 1920.

See more on the paper about Cardini, "A Preliminary Investigation of Two Prehistoric Cave Sites in Southern Albania".

This blog on Himara Village describes how the cave has been occupied from Neolithic times.

I just hope that steps are taken to preserve the site.

Posted by cavingliz at 5:40 PM