In 1983, after visiting the Fertorakos stone quarry near the Austrian - Hungarian border at Sopron, we drove across Hungary to the main caving area of Aggtelek. On the way we stopped at some caves.

Our next cave visit was  Forras Barlang. This is at Tihany, which is a peninsula on the north shore of Lake Balaton, the largest lake in central Europe. Earlier we had driven past Badacsonytoma which is located by a volcanic hill. There are basalt rocks.

Tihany Abbey is a Benedictine monastery. Forras Barlang is a little gated cave used as a workman's store. 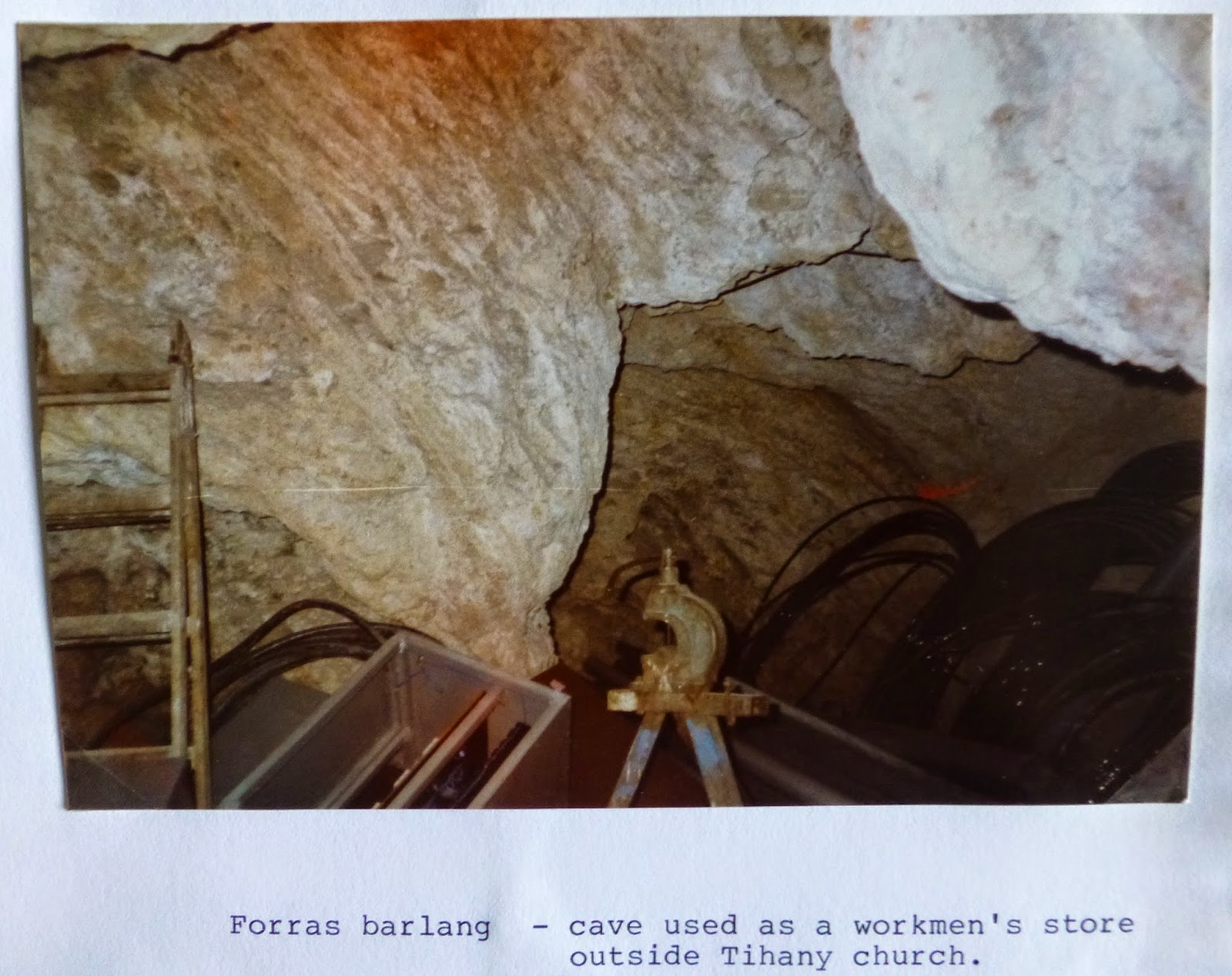 It seems to be a hydrothermal cave. The cave is located in the forráskúpban, which is the former castle of Tihany, where the abbey church was built.

From Tihany we drove to Budapest. After spending time there we went on to Eger, Monosbel, Dedestapolscany and over the Bukk Mountains which is a national park. We stopped at Omassa to see an iron works museum. Iron processing works started in the 1770s. We then reached Lillafured where we visited show caves.

Lillafured is between Eger and Miskolc. There are 3 caves although we only visited 2. 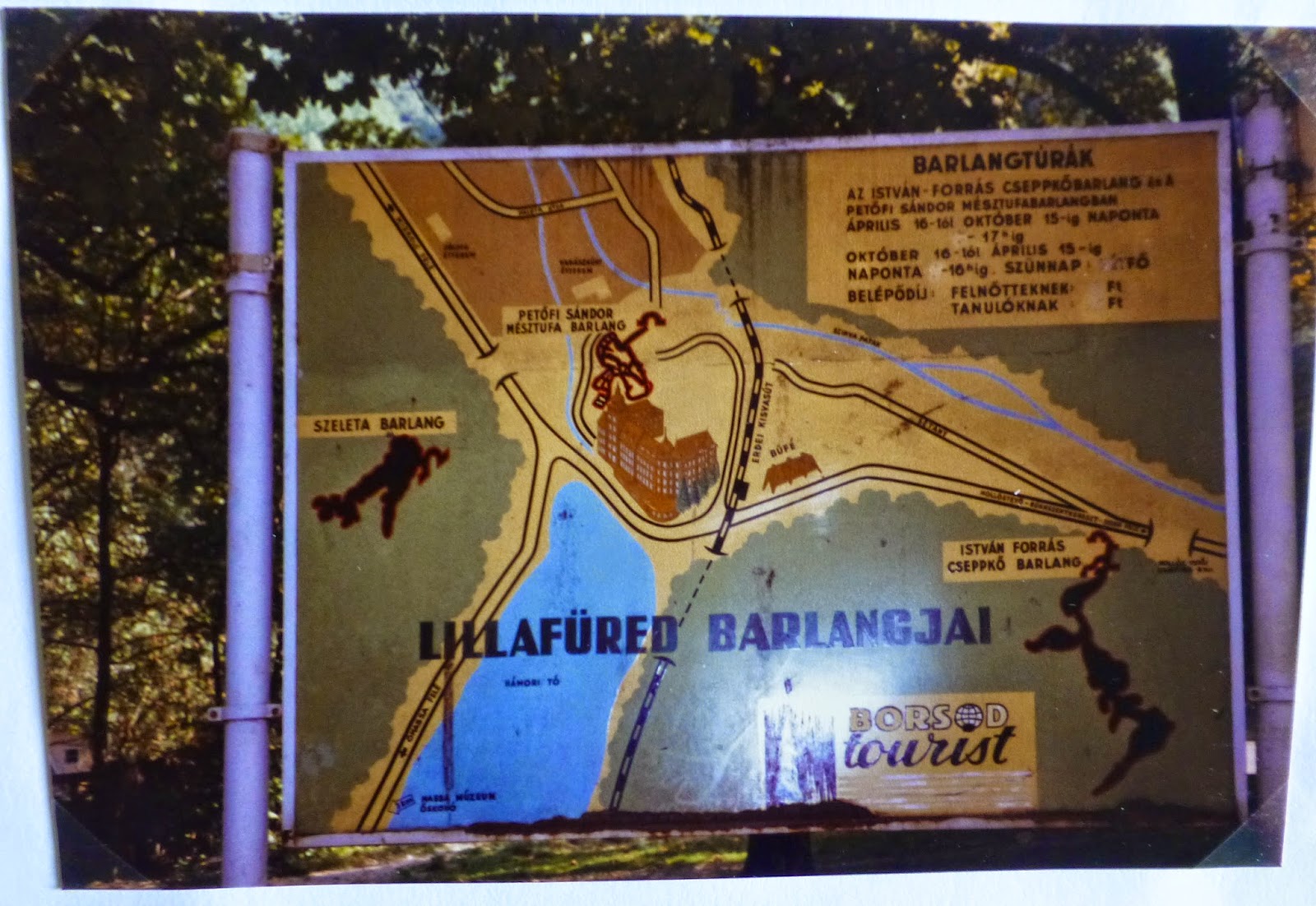 Istvan Barlang, St. Stephen Cave, is near the Hotel Palota (Palace Hotel) and south of Lake Hamori. The cave drains the surrounding plateau. Now there is electric lighting. Cost about 8p. A good cave, short though well decorated except for all the green algae. 15 min trip, saw some bats. 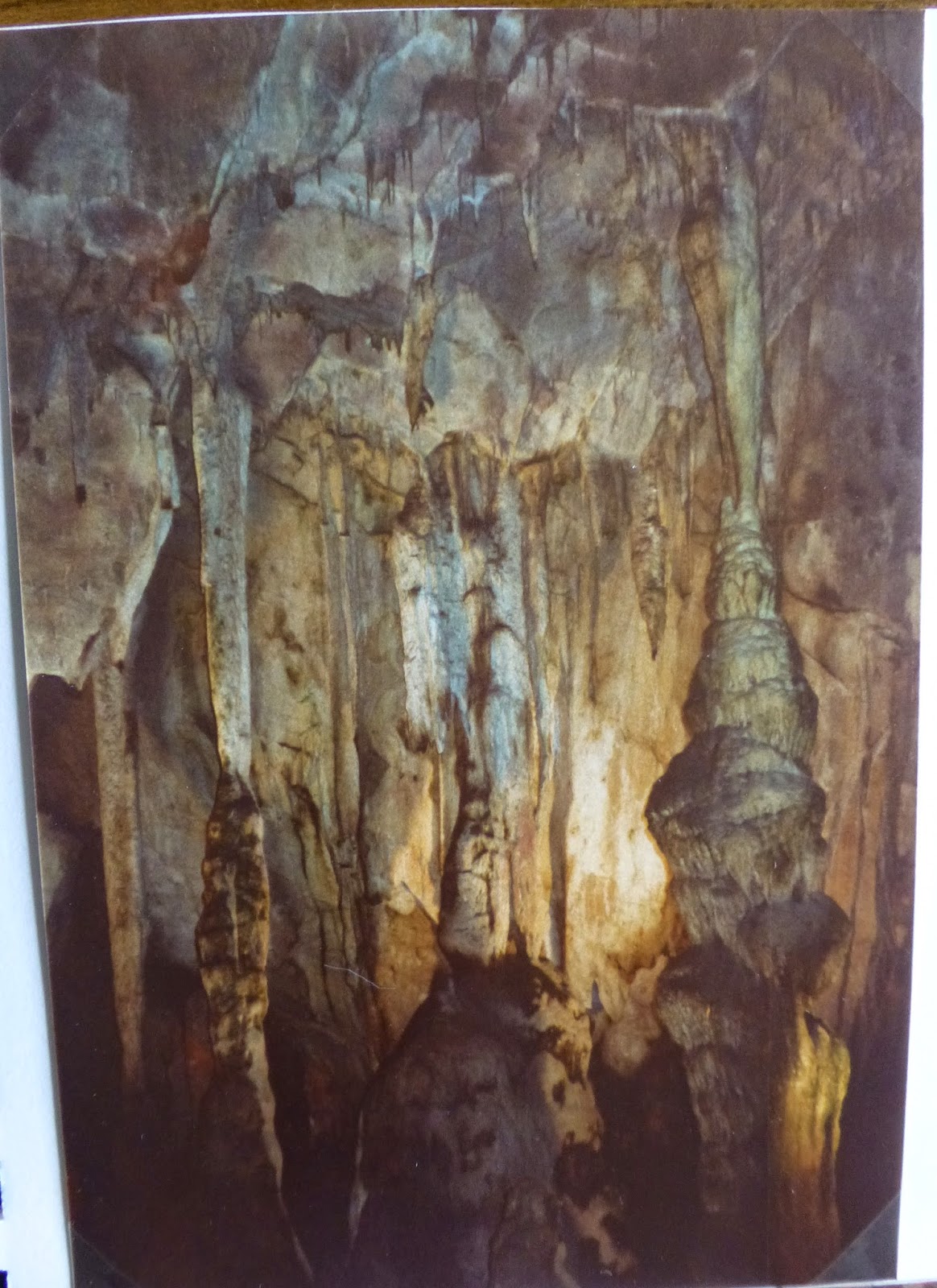 We walked through the hotel grounds to Anna' Cave, Petofi Sandor, (Mesztufa Barlang). It was visited by Sándor Petőfi in 1847, hence the name. It is a tufa cave and we had a private tour with an old lady as guide, she spoke Hungarian/German/French. Very nice with tufa formations and different from most show caves. Did a circular tour. Impressive. - 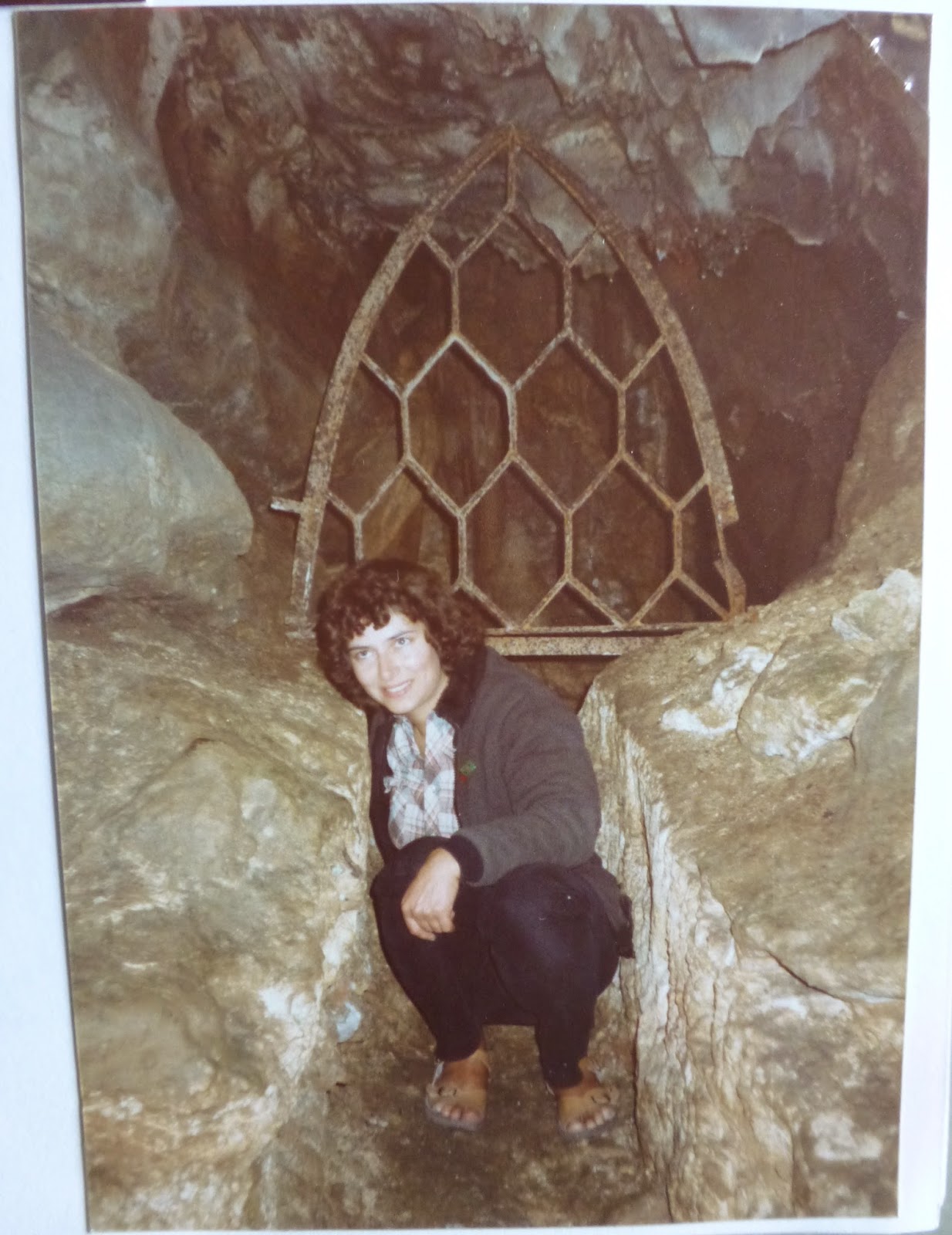 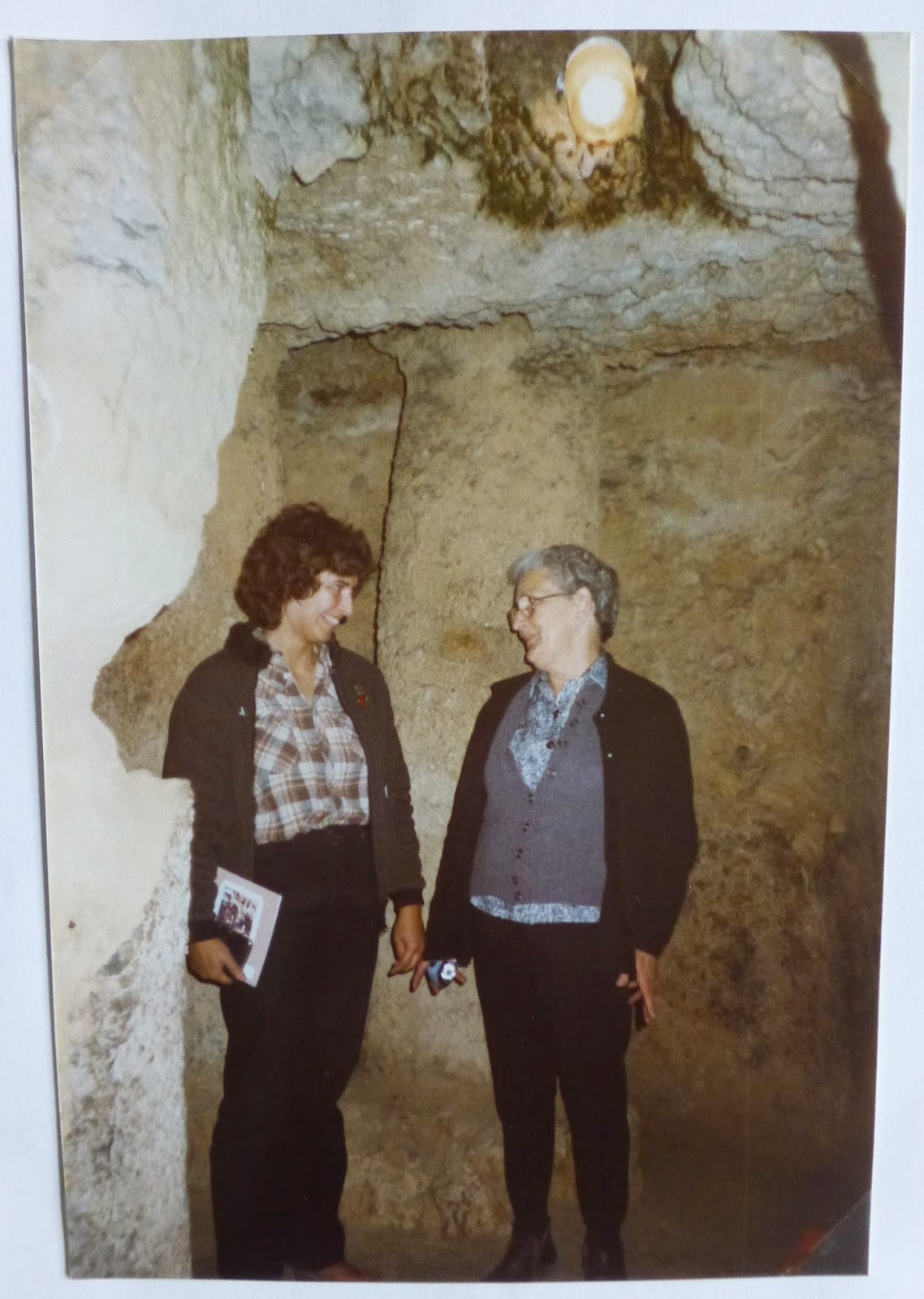 The 3rd cave which we didn't visit is Szeleta Cave.

We then drove to the industrial town of Miskolc and straight through to Aggletek. We were there for the cave rescue conference.