Marble Hill is a heritage house and park near East Twickenham in the London Borough of Richmond. The park extends down to the Thames. There is a manmade grotto in the park.

I walked upstream along the Thames from Richmond bridge, and entered the park from the river path. 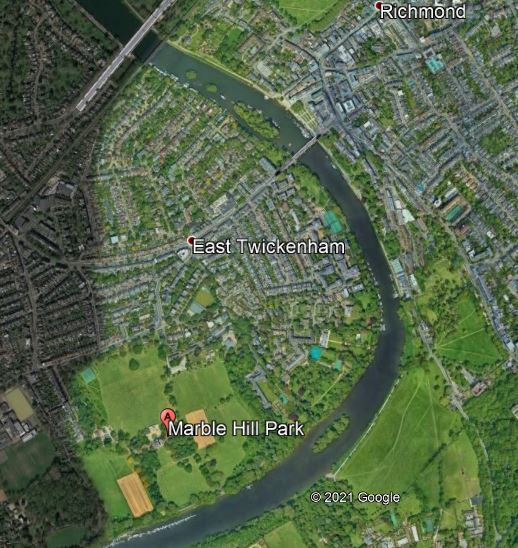 The estate dates back to the 18th century. Building work on the house began in 1724 for the owner, Henrietta Howard, who later became Countess of Suffolk. The gardens were designed as pleasure grounds, with terraces, shrubberies and trees. Henrietta Howard was the mistress of King George II when he was Prince of Wales. The house is a Palladian villa.

The existing subterranean grotto is some 100 m south of the mansion. A flight of steps leads west, down to the remains of the brick-built grotto. When I visited in March 2021, the house and gardens were undergoing extensive renovation, and the whole grotto site was fenced off. 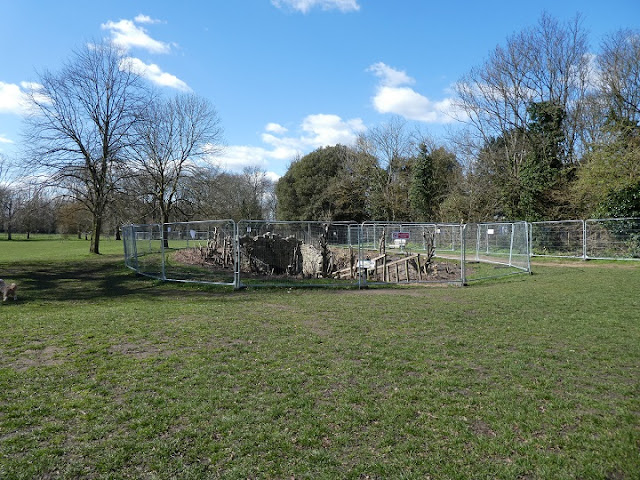 The grotto used to be enclosed within evergreen and deciduous shrubs. The shrubs have been completely cut back, but presumably will grow again - 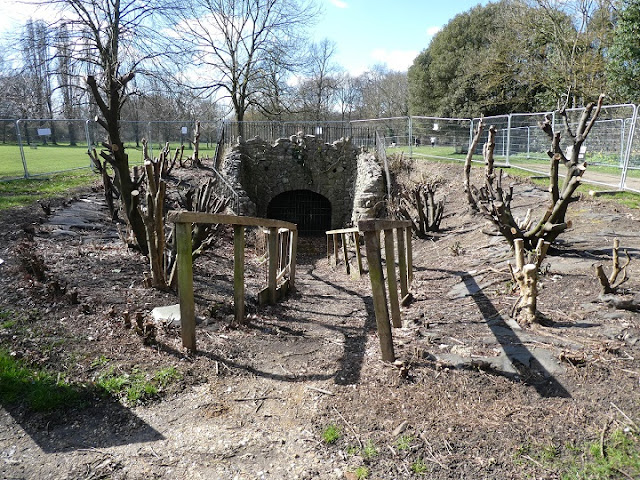 The grotto is not normally open to the public, so I didn't miss too much, I could only view it from behind the fence. 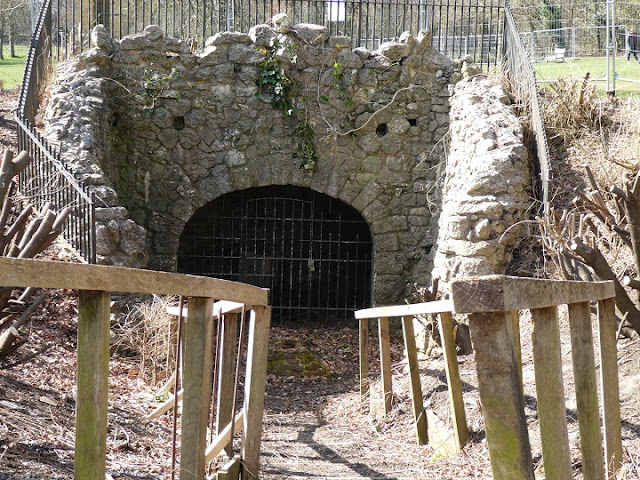 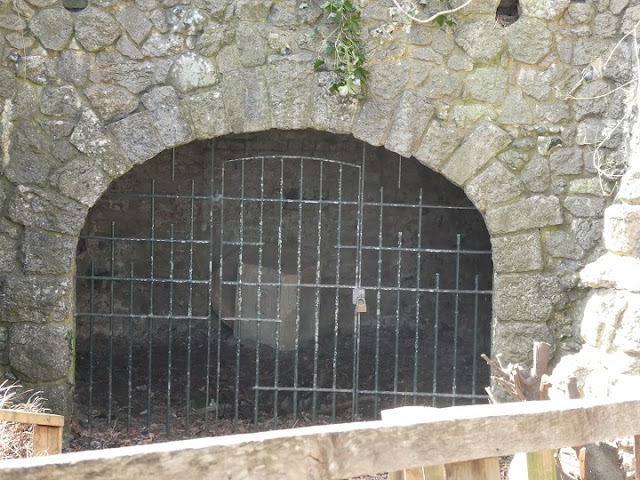 Originally there were two grottoes made for the Countess of Suffolk. However the second one had gone by 1816 and its site is not known. The surviving grotto, which by 1816 was already 'forsaken and dilapidated', was excavated in 1983 and later renovated.
The grotto was lined with shells, corals and blue glass 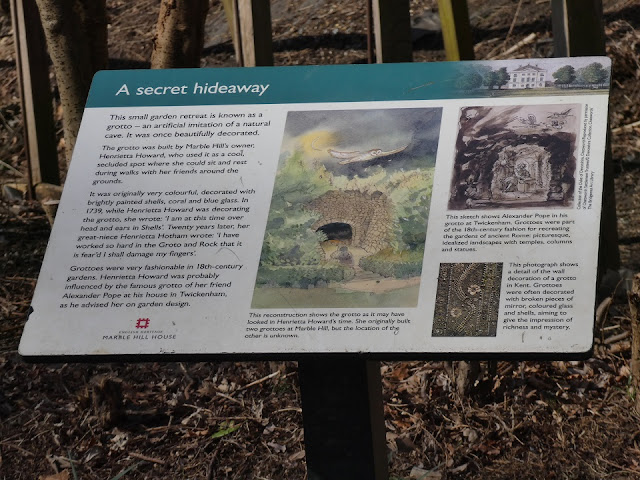 Alexander Pope the poet helped design the gardens. His grotto is situated in the grounds of his house and gardens in Twickenham, just a short distance from Marble Hill. 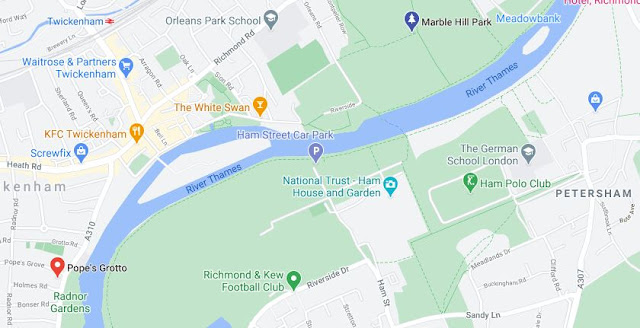 On the north-west edge of the Marble Hill shrubberies, within the wooden fencing, is the brick-built icehouse (listed grade II). I will have to go back once all the renovations are finished.

And English Heritage places to see.

"June 2021, two subterranean grottos in Twickenham will be having synchronised open days on the same day. Grottos were the height of fashion in the early eighteenth century and Twickenham is home to two of the most spectacular examples. The Pope’s Grotto Preservation Trust and English Heritage, supported by the National Lottery Heritage Fund, are offering a rare chance to visit both Alexander Pope’s grotto in Cross Deep and Henrietta Howard’s grotto at Marble Hill in one day."

However when I tried to book one month before, tickets were already sold out.

At the end of Feb 2022 I went back to Marble Hill to see if the grotto was open, but found an archaeological dig was in progress. The notice board says they are removing the soil to reveal Henrietta Howard’s lost grotto. 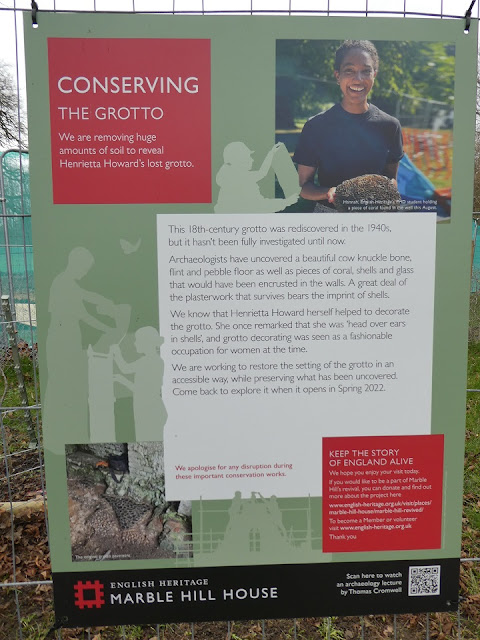 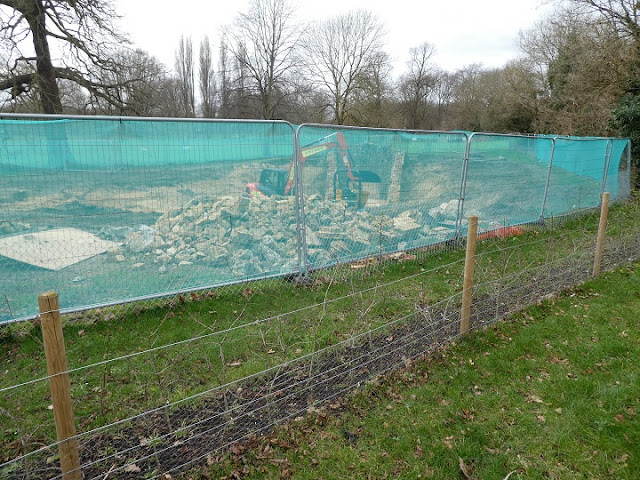 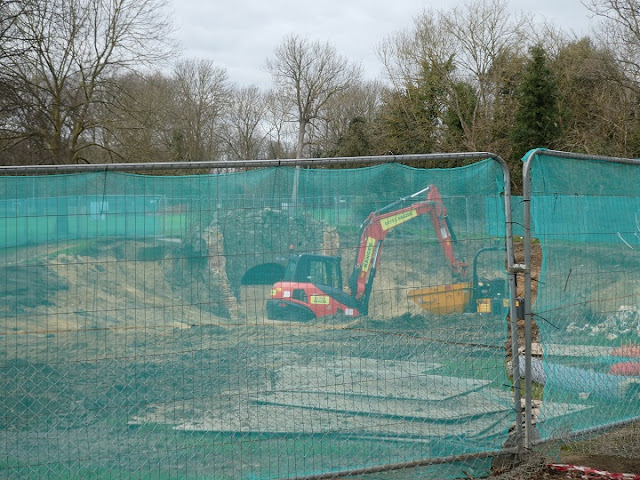 I don't think it will be open by the spring as the notice suggests!

This English Heritage page gives more info on the updates to the grotto work, Nov 2021 and some of the finds. 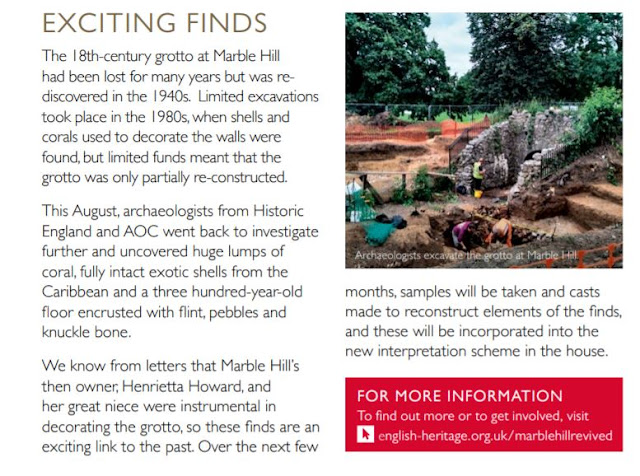