Corfu water tunnels - not natural caves, but at least they are underground!

The Greek island of Corfu does have a few natural caves, but they were all to hard to get to via public transport. I stayed in the village of Benitses and immediately behind is a high range of hills that contain caves. I didn't attempt to get to any, instead I decided to go to the water tunnels and aqueduct.

It took me 2 attempts to find the Benitses springs and water tunnels. They aren't marked on any map that I had. The first day I started on the right trail, but decided it was wrong, so turned back and took another trail. This led quite steeply uphill. When it levelled out and went down slightly, I almost turned back, but carried on a bit and then found one spring. It is by Agia Paraskeuh church and the water comes out of a pipe. I filled up my water bottle, ate a peach and left.

The next day I got a sketch map that showed Benitses water springs and set off. This time I continued on the initial trail I had taken yesterday. It is Route 1, marked by white and red markers. There were also a couple of signs saying water springs. The path led gently uphill, more or less alongside a stream, so I guessed it was right. I was really pleased when I came to the water tunnels.

These were constructed when Sir Frederick Adams was Lord High Commissioner of the Ionian islands, 1824 - 1832. After the Napoleonic Wars, in 1814 Corfu was placed under the protection of the British. This meant the British were responsible for the building of the roads and the creation of the island's water supply.

The first tunnel I saw is the biggest. It is dated 1909. There was also an old laminated sign "Lord High Commissioner during the British Protectorate, Sir Frederick Adam. 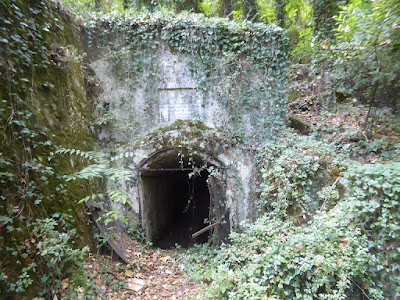 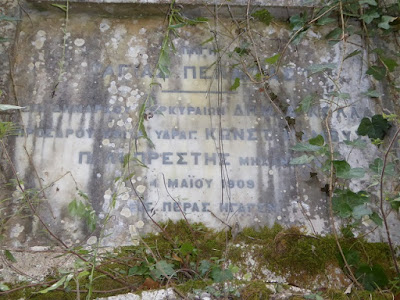 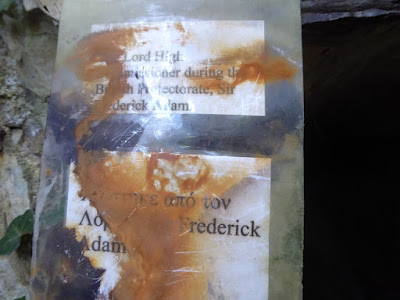 As it was the end of summer, the water level was low, and didn't cover the pipe leading into the tunnel, so I was able to walk along that. This led to the "control room" with 3 "controls". There was very little stal in the tunnel. 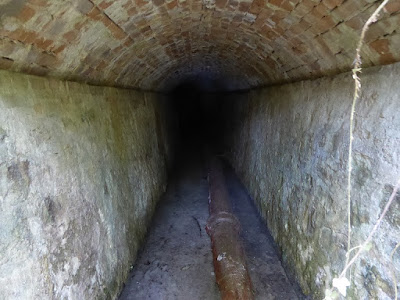 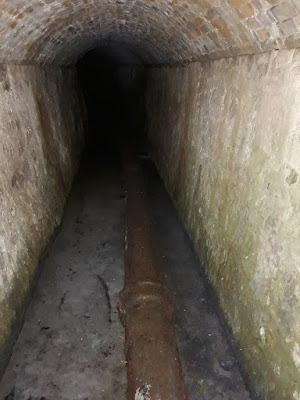 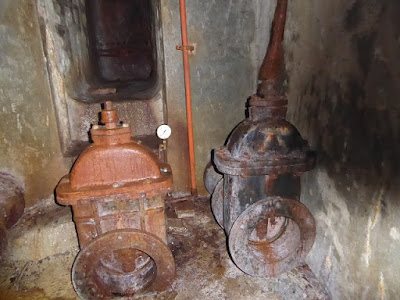 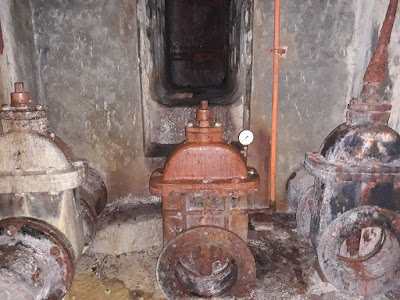 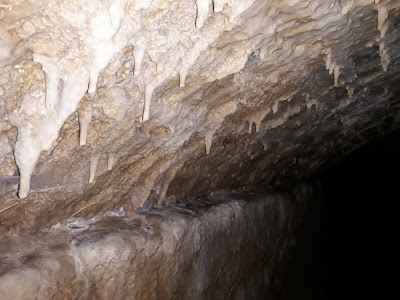 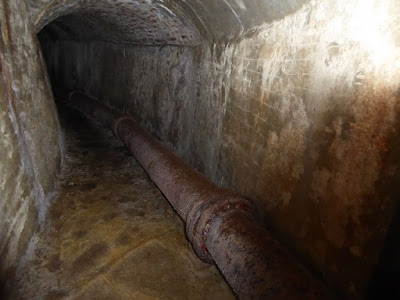 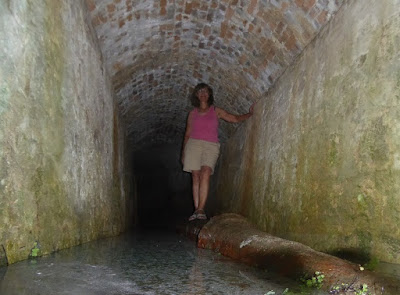 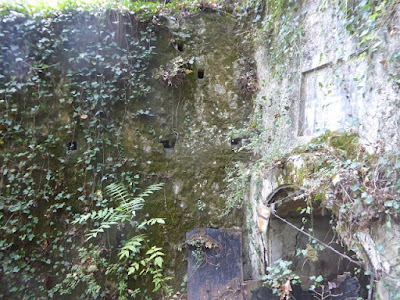 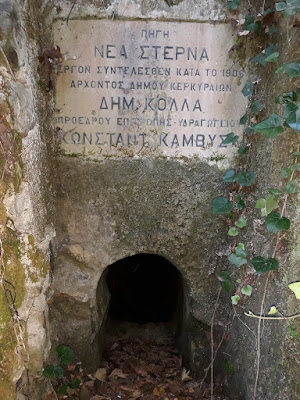 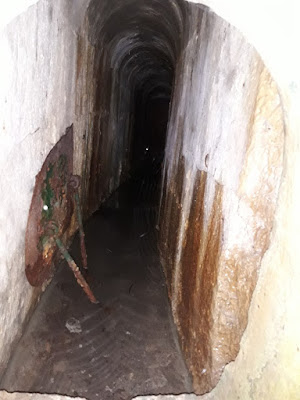 The 3rd one I took at was very small and water was coming out of a pipe right inside the entrance, there didn't seem to be a tunnel. 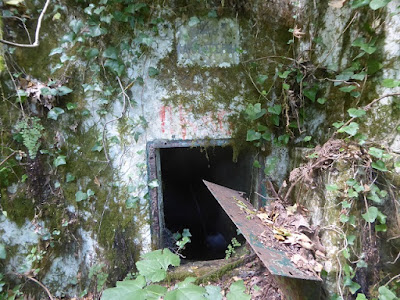 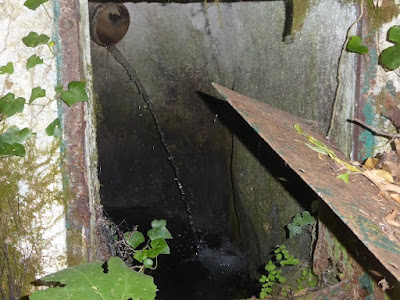 Slightly higher was another entrance above a dry stream. This was a through tunnel. 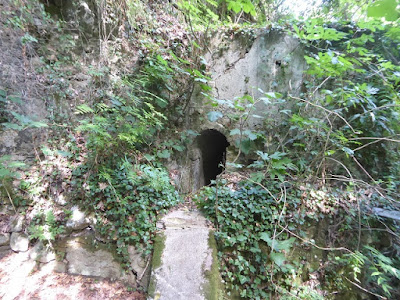 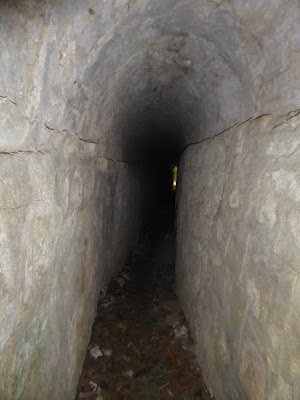 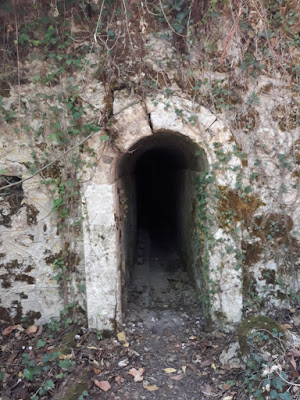 Another very small entrance, it was dry inside and there seemed to be more calcite. This was right by the steps leading up to Agios Nikolas church. 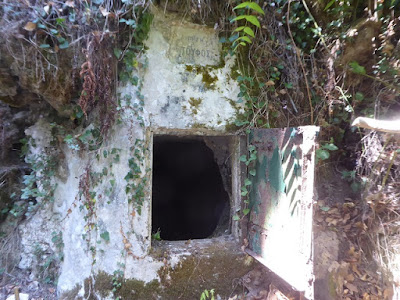 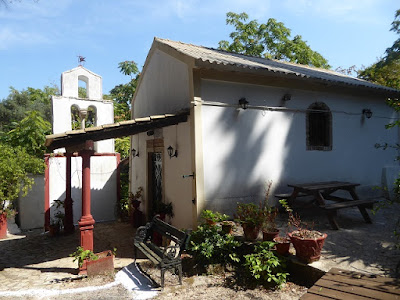 The stream above the church was completely dry, but presumably there would be a waterfall here in the wet season. 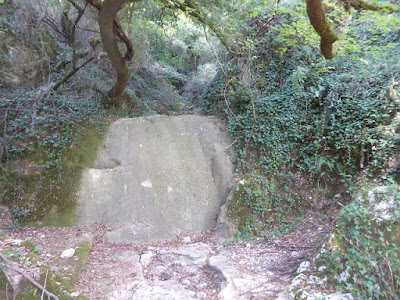 I had a look around, but still didn't find the aqueduct. One report, Belvedere Trails, says it is at the top of the hill, which seems strange as the springs are lower down. The aqueduct was marked once, in the village, then there were no more signs. However I am not even sure how much of it still exists. It was built in 1830. 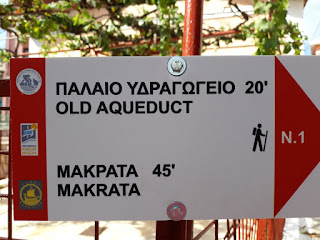 Aqueducts on Corfu :
The Romans created the first aqueduct network in Corfu between the 1st and 2nd century AD to transport water from the source of St. Gourgis, source Lartourou in Vryoni area and the source of Chrisiida.

During the period of British occupation in Corfu, there were problems with water supply to the villages. The British High Commissioner Sir Frederick Adam decided on a solution to the problem by transporting fresh drinking water from the source of Carteri and St. Nicholas in the area of Benitses down to the village.

On October 18, 1830 in the Senate he proposed the construction of an aqueduct 6.5 miles from Benitses at an altitude of 55 m. The budget was £19,386. The Senate unanimously accepted the proposal and the water supply to the city from the new aqueduct began with a ceremony in the main square just 10 months later on August 7, 1831. Info from Corfu aqueduct. There are also old photos on that page.

--
Ruins of Roman baths
There are the ruined remains of an old Roman villa with baths in Benitses village. 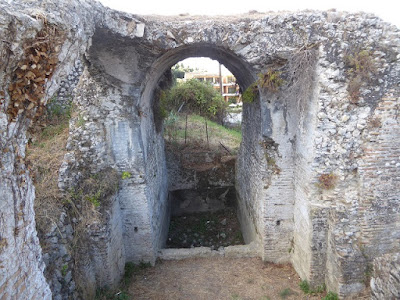 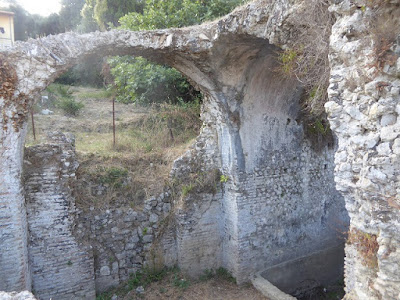 There is a lot of info on the villa and baths on this site, atcorfu. On that page are photos with a yellow info sign, that sign no longer exists. It is a pity there is no info at all now, so tourists have no idea what they are looking at!

Posted by cavingliz at 9:53 PM