The ancient copper mines on the Great Orme are located in Carboniferous Limestone formed around 330 million years ago. Their discovery in recent years meant the history of the metal age for Britain had to be rewritten, as it was found that mining of the copper ores began in the early Bronze age around 4000 years ago and continued until around 600 BC. This is earlier than first thought. 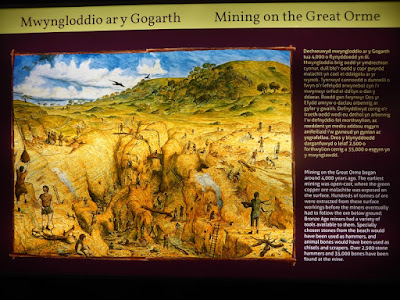 The above poster says "Mining on the Great Orme began around 4000 years ago. The earliest mining was open-cast, where the green copper ore malachite was exposed on the surface. Hundreds of tonnes of ore were extracted from these surface workings before the miners eventually had to follow the ore below ground. Bronze Age miners had a variety of tools available to them. Specially chosen stones from the beach would have been used as hammers, and animal bones would have been used as chisels and scrapers. Over 2,500 stone hammers and 35,000 bones have been found at the mine."

Mining recommenced in the late 17th century and continued into the 19th century. The main mining area was near the halfway tram station, where shafts and spoil tips can still be seen. Since their discovery in 1987, mining engineers, cavers and archaeologists have mapped the tunnels of the ancient workings as well large areas of the surface landscape, revealing remnants of bell pits aligned with geological faults.

Today the Great Orme Bronze Age Mine is a tourist attraction. It is located close to the halfway station of the tram. It is a self guided tour, starting with a short film. Then you can explore some of the workings, and find out more about life of the Bronze Age miners. 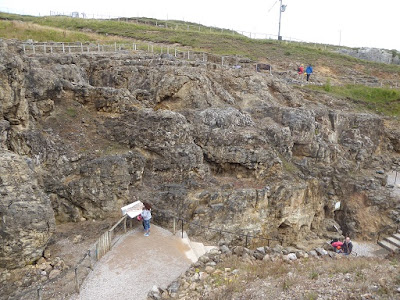 The miners worked underground for more than 1000 years, reaching depths of 70 m (220 ft) below ground. The tunnels were mostly very narrow, many of them were only big enough for children to work in. For lighting they used animal fat lamps or candles.

Entrance to the underground section that is open to tourists. 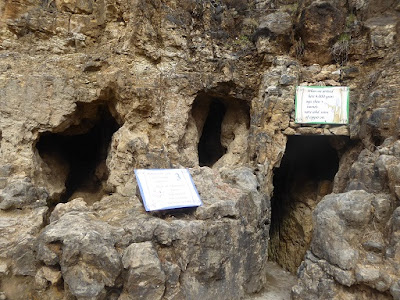 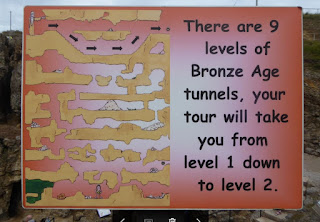 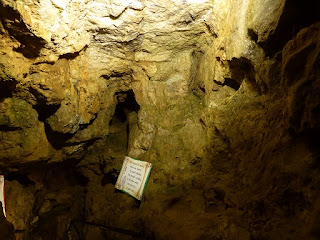 The basic tools of prehistoric miners, found when the ancient mines were rediscovered in the late 20th century, were stone hammers, animal bones and antler picks. Mining was such hard work that the ore-bearing rock was roughly sorted underground and only the ore was taken to the surface. The waste rock was stored in abandoned passages.

When the rock was not too hard, fires were lit to weaken it. The charcoal remains from these fires have been carbon dated, confirming that the mining took place between 3000 and 4000 years ago. 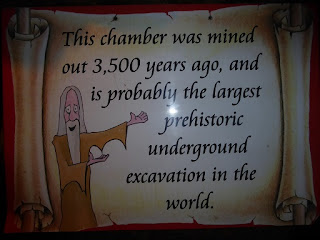 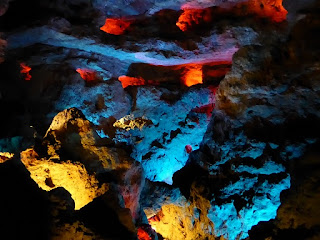 One shaft open to the surface is 145 m deep! It goes down to sea level. 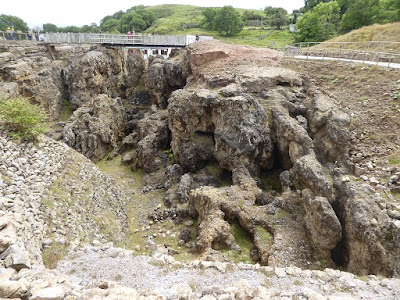 You can see an explanation on how the ore was smelted in kilns reaching 1100 degrees C.

It is amazing to think that the site lay entirely hidden for decades, being covered with spoil. The photo on the left shows the site in 1987. 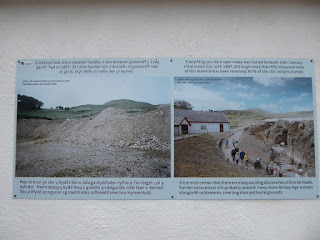 Currently over 5 miles of tunnels have been found, making this the largest known Bronze Age copper mine in the world.

See and read more on the mine www, greatormemines . There are some good photos, a video and lots of info.
Posted by cavingliz at 4:39 AM