Dunhuang is located at the western end of the Hexi Corridor in Gansu province in China. It is like a small oasis surrounded by mountains and the Gobi desert. The area was established by Emperor Wu of the Han dynasty in 111 BC and was a base for imperial China to manage the Western regions. It became an important trading town on the Silk Road.

The Mogao Caves at Dunhuang are a UNESCO World Heritage site. "Situated at a strategic point along the Silk Route, at the crossroads of trade as well as religious, cultural and intellectual influences, the 492 cells and cave sanctuaries in Mogao are famous for their statues and wall paintings, spanning 1,000 years of Buddhist art."

"Carved into the cliffs above the Dachuan River, the Mogao Caves south-east of the Dunhuang oasis, Gansu Province, comprise the largest, most richly endowed, and longest used treasure house of Buddhist art in the world. It was first constructed in 366 AD and represents the great achievement of Buddhist art from the 4th to the 14th century. 492 caves are presently preserved, housing about 45,000 square meters of murals and more than 2,000 painted sculptures."

On 16 May 2017, a month long exhibition on the Sacred Art of the Silk Road: Dunhuang's Buddhist Cave Temples opened in London, at the Prince's School of Traditional Arts. I went to have a look on the first day.

There were a lot of digital posters of the cave paintings, with lots of information as well as a couple of replicas of caves. It was quite a lot to take in! 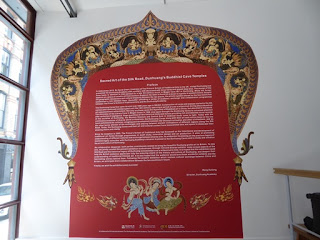 734 rock cut caves were constructed at Mogao Caves from the 4th to 14th c.  Murals and painted stucco statues still exist in 492 of these caves. Replica statues of the Heavenly King of the North and the South - 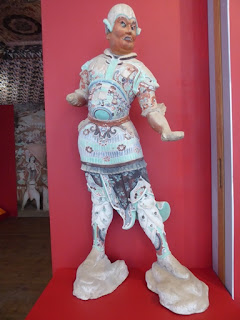 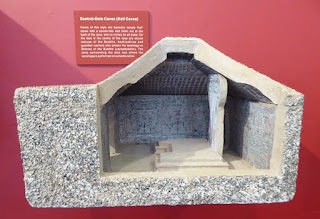 Cave 275 is one of the oldest, 397-439 AD and the main wall shows a large cross-legged Bodhisattva Maitreya seated on a lion throne and holding a preaching mudra. 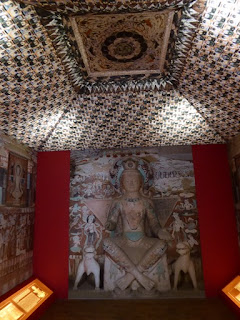 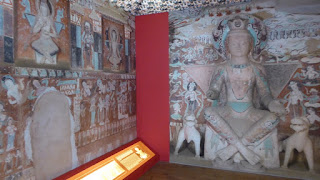 A calsson is the square roof of the cave, shaped like an upside down 'bucket', with painted patterns such a lotuses, Baoxiang flowers, flying celestials, triple rabbits, rounded dolphins, paired phoenixes or dragon and phoenix in the central square, circled by multi-layer stripes of decorative patterns. It is usually surrounded by a splendid and intricate painting of tents, chaplets and golden bells forming a coherent image of a square canopy. Caisson with triple rabbits inside an 8 petal multi-layered lotus which is surrounded by 8 flying celestials and swirling heavenly flowers, from cave 407 - 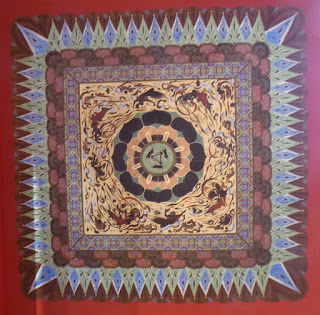 'Buddha of the Blazing Light' surrounded by celestial and astronomical deities - 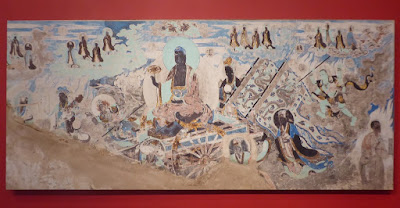 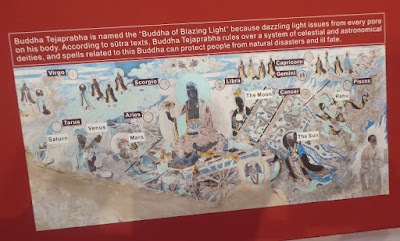 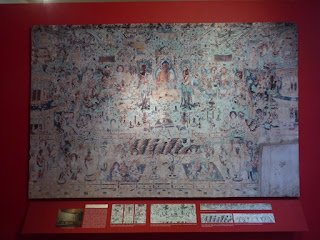 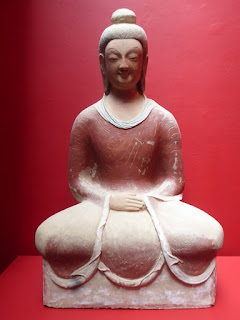 There was a walk in replica of Cave 3, which is devoted entirely to Bodhisattva Avalokitesvara 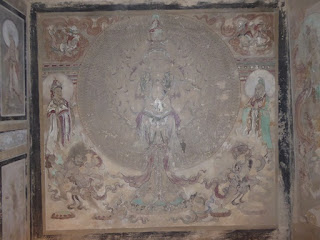 One interesting section was about the pigments used for the murals. These pigments were extracted from natural minerals and were treated by crushing, de-ironing, grinding, rinsing and grading to produce a range of hues and shades. These pigments are pure and rich in colour and are durable as well as being light-fast and resistant to acid and corrosion. Gelantine was used as a binder. Bristle brushes were used to apply the paint. 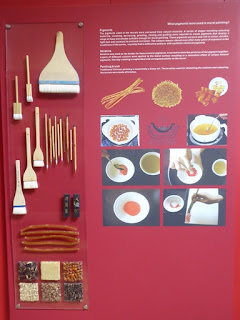 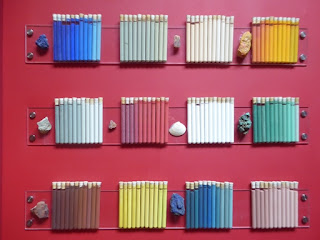 To make the murals, first sandy mud was mixed with straw to form a paste which was plastered onto the cave wall. Then silty mud was tempered with hemp fibre to form a paste, this was applied onto the previous layer. The mud came from the Dangquan River in front of the Mogao Caves. The silty mud layer was then whitewashed with kaolin, lime or gypsum. The surface was then ready for painting.

Freehand sketches were drawn onto sections of the wall, using a brush and a light earth-red pigment. Images were then added and scaled up. Next, the stencilling - outlines of the full scale images were drawn with ink on paper and pricked with holes. A fabric pouch holding coloured powder was  pounced over the holes. The powder coming through the pouch would penetrate the holes in the paper and leave fine dotted lines on the wall. The lines were then inked up to form images using brush and ink. The next process was the colouring. The master artist would draw symbols as colour codes to indicate to the juniors which colours to use. 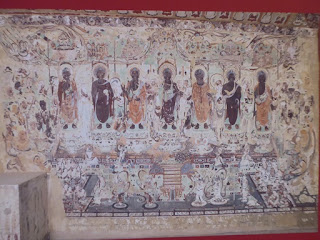 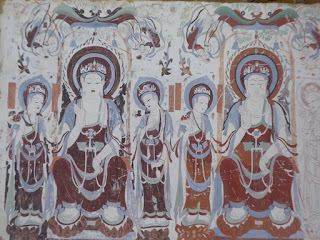 The deep blue colour comes from lapis lazuli, a metamorphic rock that is mined. It has always been highly regarded and in middle ages was valued the same as gold. It was used for the most precious statues and paintings. 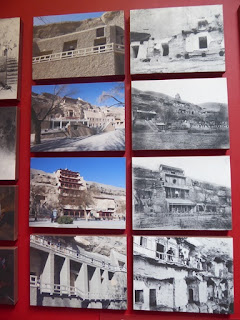 The next room had a display of calssons. 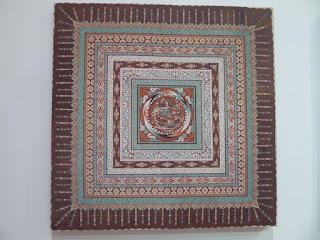 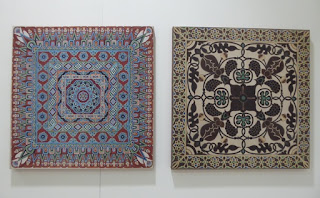 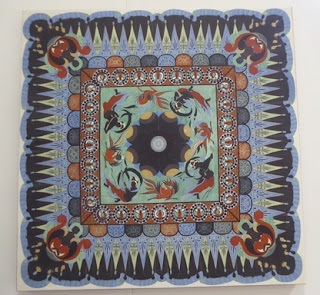 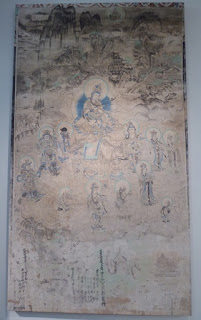 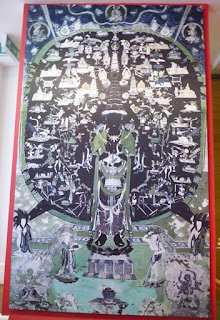 During the month long exhibition there are short courses on many aspects of the paintings, Silk Road patterns, the alchemy of colour etc, as well as various lectures.

See more on The Prince's School of Traditional Arts and also on Artlyst.

Posted by cavingliz at 3:58 AM