Salt Mine at Berchtesgaden, Germany

I was in Salzburg in Austria and we had a chance to go to a salt mine. I thought we were going to the Hallein mine in Austria, but instead we went to the one in Berchtesgaden in Germany.

Salt has been mined in Berchtesgaden since the 12th century. The current salt mine has been operating for 500 years (1517). The Salt Mine employs approx. 100 employees. Half of these work underground. 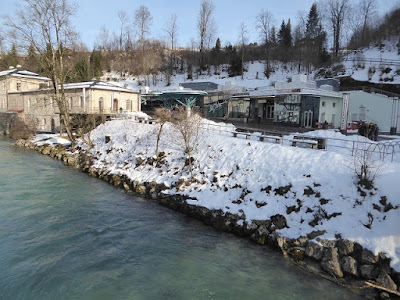 It was a really fun and interesting tour, although sadly no photography is allowed. First everyone is given overalls to wear and bags and coats must be placed in a locker. Then there is a 650 m train ride into the mine. The non German speakers are given a recording to listen to in each relevant section. From the train we walked into the Salt Cathedral and did the first slide down to the lower level. This was great fun, up to 4 people at one time going down the steep 34 m slide. We went through some tunnels and saw a grotto in honour of King Ludwig II.

We moved into a room and were shown a film on salt mining with a display on a 3D model. I hadn't realised the salt is extracted as brine, it is not cut in blocks. The salt does not occur in a pure form, but is encased in “Haselgebirge”, a composite rock contains an average of 50% salt.

Salt deposits are proven to be up to 300 m below the valley floor in the area of the Salt Mine.  It is released from the mountain with the aid of freshwater using a “wet mining” method. Hollow spaces are created, then water is pumped into these voids, this water removes the salt from the composite rock on the floor, walls and ceiling. The salty water is denser so sinks to the bottom. It has a 26.5% salt content. The hollow space is constantly enlarged as more fresh water is fed in. This process is repeated until a 3,500 to 5,000 cubic metre hollow space is formed.

At five mining levels, 20 state of the art so called mud-flush drilling plants are in operation. Approx. 900,000 m³ of brine are extracted per annum. 2.000 m³ of freshwater are required for this each day.

The brine is pumped up to the surface and to the refinery where the water is extracted leaving pure salt. The Berchtesgaden brine is pumped to the Salt Works Bad Reichenhall further processed into industrial salts there.

Down to 400 m depth below the mining route level, samples are taken by drilling in order to ascertain the minimum salt content in the rock.

We went through more tunnels and saw the airlift drilling equipment. Next stop was the Magic Salt Room. In the centre of the room is a container of large salt crystals and different colours are played onto the salt, then a series of stories relating to the mining are screened on to the walls. It was very effective.

We then took another slide down to a lower level, this slide is 40 m. We came to a large chamber and initially I thought it was empty until I realised there was actually a lake. The ceiling is perfectly reflected in the water. We crossed the Mirror Lake on a large wooden barge, with the accompaniment of music and lights displays of salt chemical structure played on the walls. We saw a pump that is used to lift the brine to the surface, it is made of bronze. One of the old pumps used to lift the brine up 356 m. The brine was then sent in wooden pipes from Berchtesgaden to Ramsau.

Next we took an elevator back up 2 levels and took the train journey back out of the mine. 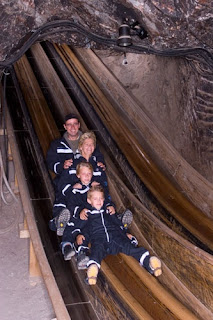 For photos and more information, see The Salt Mine Berchtesgaden.
Posted by cavingliz at 12:28 AM