In 1987 I went to Nepal for the first time. There are not many caves in Nepal, but one of the most famous is just outside Kathmandu. This is Chobar Cave in a gorge of the same name.

Chobar village is about 9 km southwest of Kathmandu. The village overlooks the Bagmati River. The Jal Binayak temple is at the mouth of the Chobar Gorge and you can cross the Bagmati River here. The suspension bridge was made in Scotland more than 100 years ago.

There are various legends about the gorge and caves. One legend says the chasm was cut by Manjushri's sword (Manjushree).All the water from Kathmandu Valley drains through this gorge. 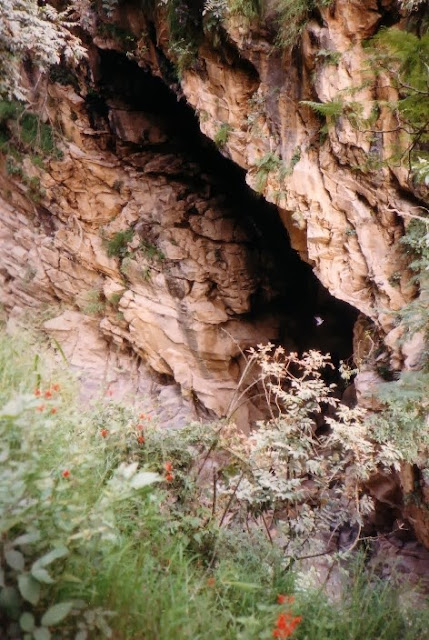 This is a 1997 view of the entrance, and you can see a bird flying in the entrance.Since my visit, a team of French cavers mapped the caves in 2007.

At the time I was in Nepal, the only show cave was Mahendra Gupha. Mahendra Gupha is located north of Pokhara, the area is known as Batulechaur. I don't have any photos of the cave, but this is one of Mahendra Gorge 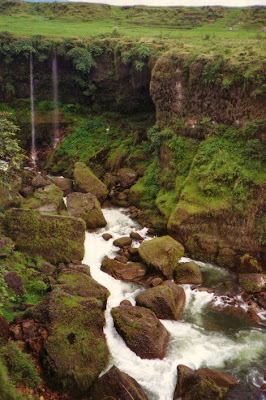 The cave was electrically lit but there were only half a dozen lights so I was glad of my torch. The cave is about 240 m long with 2 entrances. The main one has steps leading down to a wide arch. The main passage runs north-south and ends in breakdown. The cave is developed below coarse conglomerate and is horizontal. There is a stream on the left of the main passage.

In 1979 according to Gebauer the roof was covered with stalactites but none remain - they've all been sold. There are 2 small Siva linga. The 2nd entrance is small and muddy. The cave was rather disappointing.

There are some photos of Mahendra Cave here. The area is interesting geologically, as it is carbonaceous Holocene conglomerates, not real limestone!