Hiking up to see the beauty of KL's Klang Gate Ridge
Published on The Brunei Times (http://www.bt.com.bn/en)
Sunday, August 10, 2008 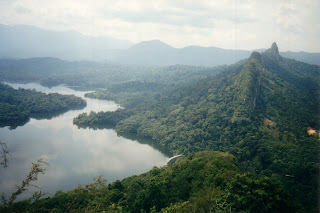 THE spectacular Klang Gates quartz ridge forms the backdrop to the Ampang side of Kuala Lumpur (or fondly called "KL" for short by the locals here), extending to the Karak highway where it almost touches the toll booths.

It is an impressive site, almost resembling the backbone of some prehistoric creature, guarding the Kuala Lumpur valley. Although often mistaken for limestone, it is the longest quartz ridge in the country at about 16 km. Quartz is a common mineral, a silicate used for making glass.

The ridge has ragged cliffs up to 120m high, and its length is broken into sections by river valleys. Its top is a jagged knife-edge, in some places only a few metres wide, with precipitous drops on either side. It is a popular place for walkers, climbers and nature lovers. From the ridge top there are stunning views over KL and also the Klang Gates dam. Certain areas of the ridge are on private land. Unfortunately developments encroach closer and closer to the ridge and in some parts houses almost touch the cliffs.

The most spectacular part of the ridge is its mid-section, Bukit Batu Tabur, which stretches 4km to 5km from Taman Melawati to the National Zoo. The access point is from the Puncak Niaga waterworks. The initial climb up to the ridge is hot and sweaty work as you follow a steep narrow path. But it is worth the effort as the first view is over the dam. The dam was the first reservoir in Malaysia and it was opened in 1958. It is one of the water catchment areas for KL and Selangor. Beyond the dam are the mountains of the main range, still covered with thick rainforest. If you are lucky to get good weather, you can see for miles.

On one occasion I went to the ridge with a friend who is agoraphobic. This was a mistake as his fear of open spaces meant that as soon as we emerged from the narrow, sheltered path onto the main ridge, he started to worry. And as we went higher and the pathway got narrow and the drops steeper, he was not at all happy. Once up on the ridge you can follow the trail as it winds slowly upwards. After millions of years of erosion, the ridge is now just a narrow spine. It is relatively easy going, although there are a couple of sections where you have to do some simple rock climbing.

However it is not the place to be if you suffer from a fear of heights. And you need to take great care if it has been raining. My friend left me at the first climb, when he saw that we had to scale a small rock face. He found a tree to sit under and let me carry on alone. I realised then he suffered from aeroacrophobia, which is a fear of high open spaces. It's preferable to start your ascent early morning, to avoid the full heat of the sun. However there are wooded areas which provide welcome shade. Some of the trees and shrubs are very hardy, climbing precociously onto sheer rock walls. It gets very windy up here sometimes. The part of the ridge surrounding the dam and forest reserve is rich with vegetation. Surveys indicate at least 265 plant species thrive here, with five of them endemic to the area. There are a lot of mosses in the shaded areas. Because of the endemic fauna and flora, the ridge has been made into a wildlife reserve. The serow or wild mountain goat inhabits this type of terrain although is probably not in the areas frequented by human visitors.

From the ridge you can hear the gibbons in the zoo calling, although there may also be some wild ones living in the rainforest. You can walk along until you reach the area that overlooks the Karak highway. However most people don't get that far, as it can be quite a strenuous walk. The ridge is worth a visit, as it is unique, and could be a valuable geological monument.

However very little has been done to protect it.

A native of England, now living in Malaysia and specialising in cave and karst research. A freelance writer who is a nature lover and traveller, who prefers off the beaten track tourism.